As I observed a group of children creating mini catapults (inspired by our wonderful science workshop from Irresistible ideas for play based learning at the http://www.inspiredec.com/ conference)  I sat tying a couple of balloons together trying to create my own mini sling shot.  One of the children nearby asked what I was doing and I explained to him.  He had obviously made sling shots before and as we chatted the idea emerged about how cool it would be to make a giant sling shot.  He decided the sandpit would be the perfect place to have it stand, and off he went to search out materials.  You could tell by the way he strutted off that ideas were spinning around in his head, and that he had already formulated a plan.  He returned dragging a huge forked branch that had been left on the grass after someone had been trying out the tools on it.  We talked about what else he would need.  “Something flingy” to put across the fork was the request.  He hunted through the making areas and couldn’t find anything that he thought even worthy of trying to use.  He returned to me and asked if I had any ideas.  We went to the shed and found an old fit ball that no longer stayed blown up…his eyes lit up as he pondered how to make it work.  “can I cut it?”. 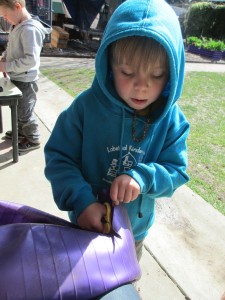 He decided on how wide he wanted the piece to be and got to work with his scissors, slowly making his way though the thick rubber until he managed to cut it all the way.  By this time his hard work had attracted a few friends who were very interested to hear about his plan.  Its amazing how having a child or small group of children totally engaged in an experience nearly always draws others to observe, discuss, reflect and sometimes even join in.  He was happy to have some help, and with out a second thought allocated his friends a part to play in his plan. 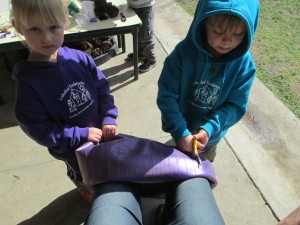 Once the piece of rubber was cut, they tested it for its stretchiness. 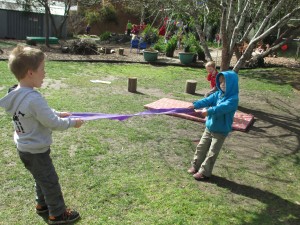 It was deemed suitable for the giant slingshot and they began tying to attach it to the forked branch. 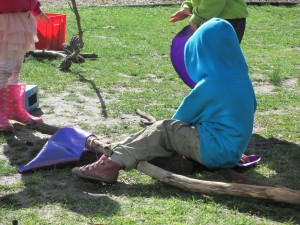 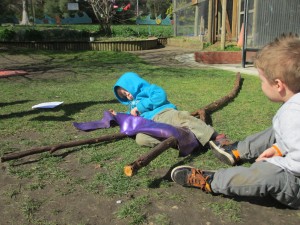 It was tough work tying it, and despite many attempts, much discussion about how to tie the best sort of knots, and LOTS of co-operative problem solving they came to the conclusion that this particular part of the plan was not working. 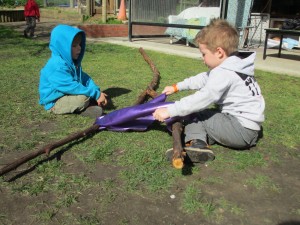 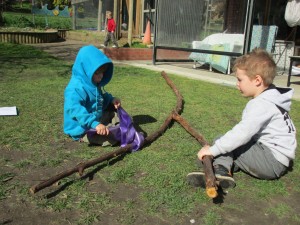 They decided they needed rope to tie it on.

A quick search located a long piece of rope. 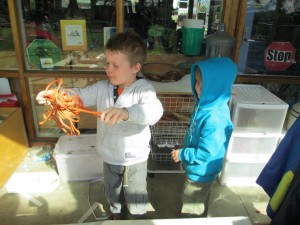 Unfortunately (or in hindsight, very fortunately from a learning perspective) it was knotted up. 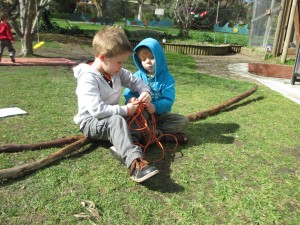 They spent a long time sitting there, having to discuss how they could get it untangled, 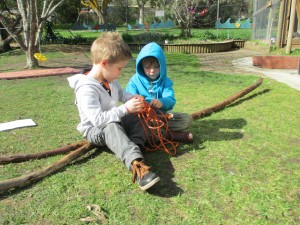 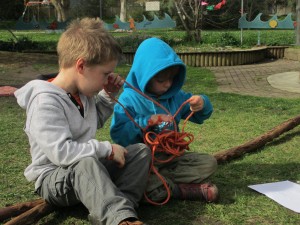 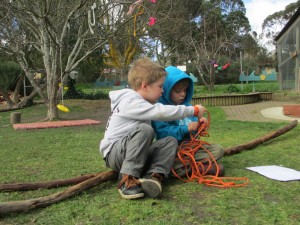 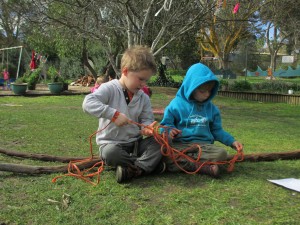 occasionally having to work through disagreeing about how it should be done….they persevered and eventually the rope sat as one long piece. 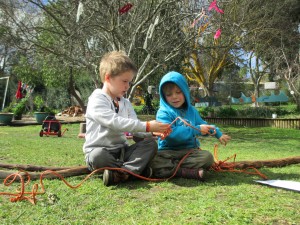 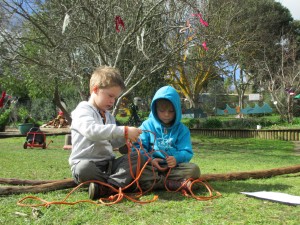 Their faces lit up, and of course they had to get up and see how long the rope was. It stretched out a long way. 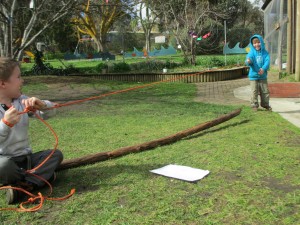 They tugged at each end for a bit, and with in seconds the grand plan of the giant catapult was no more than a memory.  The rope had become their focus. The branch and piece of rubber were left abandoned, as they pulled, stretched, and wrapped the rope around themselves and trees.  It was knotted and undone again and engaged them and directed their play for the rest of the session. 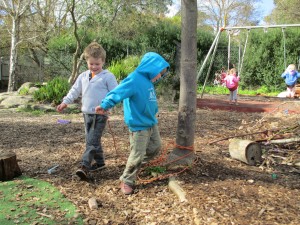 It was the process of this experience that was filled with so much rich and child led learning. It wasn’t about them making the sling shot, but about all the steps they went through on that journey.  I could have insisted they return to the making the the sling shot  (I know it would have been a lot of fun for us all) but it will be there for another day if it they need or want to pursue its creation.  The skills I saw these boys using as they went about their play were amazing, and I could not hope to have replicated the level of engagement they consistently showed by trying to direct and lead their play.  Occasionally they invited me into their experience, only briefly, and usually to fulfil a specific need, but as soon as I could, I quietly retreated and left them to it.   I observed, I smiled, I was filled with a sense of amazement and reminded how lucky we are to be part of the lives of these amazing children.

Principle 2– Children develop a range of skills and processes such as problem solving, enquirym experimentation, hypothesizing, researching, and investigation.

Principle 4– Children resource their own learning through connecting with people, place, technologies, and natural and processed materials.

Directions
to our kindy